Every time I come across a story about the Trojan War, I find myself thinking the same two thoughts: 1) Paris is the WORST, and 2) was Helen really worth all this? Today, I will be examining the latter. I could go on a rant about Paris, but I think that is a much less interesting topic. Because Paris is a much less interesting topic…okay, I’m done…I swear…onto Helen.

We’ll start with how Helen came to be with the Trojans. Most of us are likely familiar with the narrative that Aphrodite gifted Helen to Paris because he called her pretty. This is the one time I have sympathy for Paris. He was put in an impossible situation when Hera, Athena, and Aphrodite decided he should choose which of them is the prettiest. If you are unfamiliar with Greek mythology, these are three goddesses you do not want to make mad. They will mess up your life in unique and horrible ways. Paris is offered gifts by each of the goddesses that they will give him if he picks them. Apparently, he wanted a girlfriend because he picked Aphrodite and therefore got Helen, the most beautiful woman in the world. This was a problem though because Helen was already married to Menalaus, a Greek King. That wasn’t a problem for Aphrodite though. She sent Paris to Greece on a “diplomatic mission” and when he was in Helen’s sights, Eros shot her with a love arrow and the rest was war.

In the play, Paris alludes to a situation where their aunt was kidnapped and so he was sent to take a Greek prisoner. He picked Helen. I suppose that could have been the “diplomatic mission,” but either way Helen ends up in Troy and in love with Paris.

The Greeks couldn’t just let this dishonor slide and when they were all fighting for Helen’s hand, they agreed to back up whoever won her hand (who her father chose). So, all the Greek armies headed to the walls of Troy. Then, Troy decided they needed to defend themselves instead of JUST GIVING HELEN BACK! And so, years passed, as did lives, and other resources. We can’t help but wonder if the fight was worth the prize. 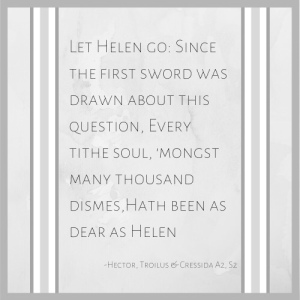 I am not the only one with this question. Priam and his sons grapple with this question in Act II, Scene 2 of Troilus and Cressida. Hector serves as the voice of reason in this scene, and he has concluded that no, she is not worth it. They have no legitimate legal or moral claim to her. She is not worth any more than the soldiers who lost their lives. The counterargument: but HONOR….

That is apparently good enough for Hector, but it was not good enough for me. Let’s take the point of view of an average Trojan soldier. You are being called to put your life on the line, so that Paris can sleep with another man’s wife. Beyond the individual, every loss will ripple throughout the community. Wives will be made widows and children will be left without a father. In addition, resources have to be limited during this time because they are under siege. Due to the nature of sieges, supply lines would be cut off, or at least hindered. That’s even before we get to the fact that Troy gets burned down!

Now, let’s look at the war from the Greek point of view. We get a glimpse of this in Act 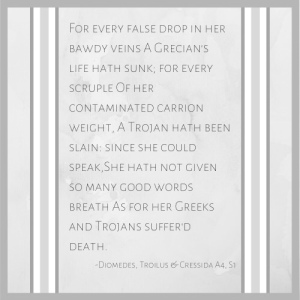 IV, Scene 1 with Diomedes. Diomedes may just be messing with Paris, but he still makes some valid points. He believes that both Paris and Menalaus are equally deserving of Helen because they are equally silly for pursuing this cause. He doesn’t think she’s worth it because she has betrayed her husband and her country. Menalaus is dumb for pursuing his strumpet wife and Paris is dumb for wanting a strumpet in the first place. She’s not worth the blood being shed for her.

I have to agree with Diomedes, especially when I consider the point of view of a common Greek soldier. They, like the Trojans, are being asked to put their lives on the line for another man’s wife. There’s at least a stronger “honor” claim because Menalaus was legally married to Helen first. However, the Greek soldiers are spending YEARS away from their wives to fight for another dude. The cost to get resources to them must be astronomical. There’s a certain point where the Greeks should just cut their losses.

Then, to rub salt in the wound, the Trojans get to come feast with the Greek leaders and be best buds for a night before everyone goes back to fighting.

In this war, both sides are fighting for the right of one man to claim the love of Helen. They spend roughly ten years fighting, an inestimable number of resources, and countless human lives.

No one is that pretty. I don’t care what Aphrodite says.