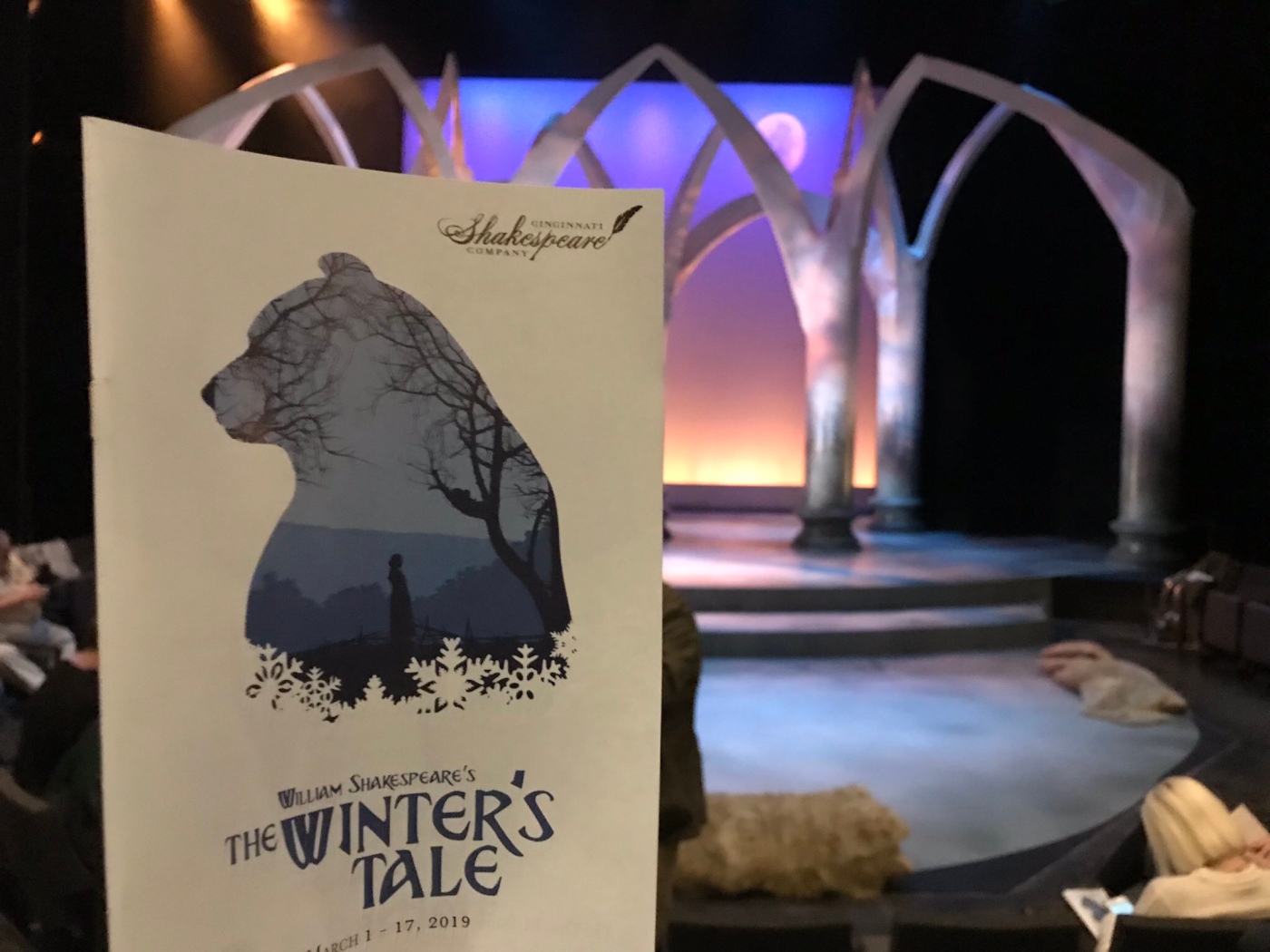 As I settled into my seat in the Otto M. Budig theatre, I had no expectations about what A Winter’s Tale would be like. I had not read this play yet, nor seen it performed. I assumed it would be well done, as most Cincinnati Shakespeare Company productions are, but I had no idea how the story might be adapted because I had no preconceived notions about the story. I laughed to myself as the older woman next to me said to her friend “You wouldn’t know it was a comedy from the first half.” I had just enough time to read the brief plot overview before the production began. One hour later, with multiple characters dead and a sorrowful tear in my eye, I thought to myself “Ah, a classic Shakespearean comedy.” 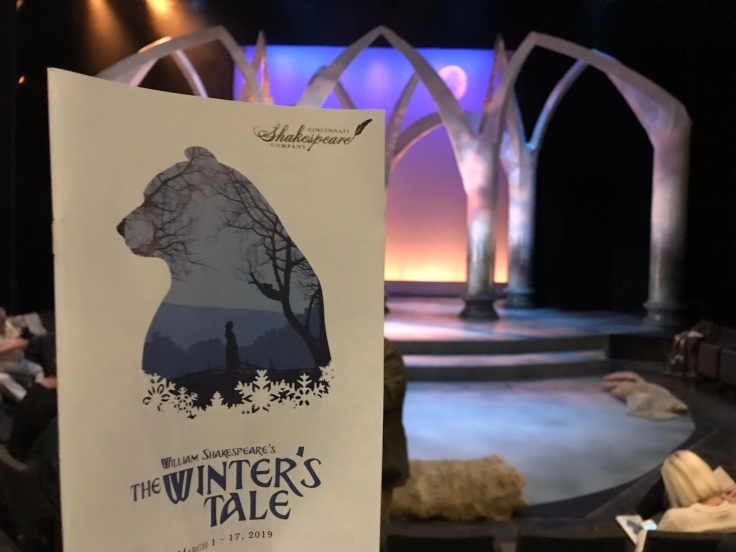 For those who don’t know, A Winter’s Tale is about King Leontes, who becomes convinced that his wife, Hermoine, has cheated on him with King Polixenes. Not only did she cheat on him, but the child she carries is Polixenes’. He attempts to have Polixenes killed, but he manages to escape. So, Leontes imprisons his wife and sends the newborn girl out into the wilderness. The Oracle reveals that Hermoine was loyal to her husband. He doesn’t believe the Oracle until his son suddenly dies. This is all too much for Hermoine and she collapses. Leontes swears to do penance for the rest of his life.

Meanwhile, the baby girl is taken in by a shepherd and raised by him. Sixteen years in the future, Perdita has fallen in love with none other than Polixenes’ son. Polixenes does not approves of their marriage, so they flee to Leontes’ court. There, Perdita’s true identity is revealed and all is made right in the end.

But this is not about the text itself. Criticism of the text is for another time. This is about the production, and all I keep thinking is “how lucky are we to have such an amazing company right here in Cincinnati?” Every actor in the company shone in a unique way, whether they had long soliloquies or a single line. Then, as if the acting weren’t enough, the set, lighting, and sound design brought the production to a whole new level. What culminated was a production that will be the gold standard for all future productions.

Silence permeated the production in such a way that it almost outshone the text. It most certainly enhanced it. We watched as Leontes allowed his jealousy to consume his reason in spite of those around him offering sound counsel. The silence allowed the audience to fully experience the tension in the air, and the fear. All who encountered Leontes expressed shock and fear while in his presence. It made clear why events were allowed to fo as far as they did. Even when Leontes showed remorse, Paulina recoiled from him in fear. The use of silence and subtle lighting enhanced the choices of the actors and lifted the production to a higher level.

If I had to pick my stand-out from the cast, it would have to be Kelly Menglekoch as Hermoine. Through her every movement and expression, she struck the perfect balance between emotion and strength, particularly in the trial scene. Her head held high and shoulders back illustrated her defiance in the face of untold cruelty, but then her pained movements and glistening eyes provided glimpses of humiliation and defeat. I audibly gasped when she walked on stage for the trial and remained in awe as the striking tableau was set. I was further pulled in when she slowly came face to face with her husband and accuser, flinching with each step. I was sad when she was pronounced dead, thinking that I wouldn’t get to experience any more of Menglekoch’s powerful acting.

Just before intermission, we were given a glimpse of the comedy that was coming in the second half through the introduction of the brilliant comic duo of Marc Moritz and Cary Davenport as the shepherd and his son. The contrast between Leontes court and the sheep sheering feast was almost jarring. To go from a cold, silent place to a colorful, musical romp almost felt incongruous. Even violent fighting was made hilarious by Maggie Lou Rader and Tess Talbot as Dorcas and Mopsa. To be perfectly honest they stole the scene. With everyone clothes in bright colors or pastels, flowers in their hair, the audience almost forgot what we witnessed in the first act.

To steal from Perdita’s line, it felt like a dream. That dream came to a crashing halt when Polixenes discovered his son’s plan. We were suddenly reminded of Leontes and the horrors that had occurred before heading back to Leontes court. We were back to the gray palette and harsh lighting. All of the warmth from before stolen away again. However, this is a comedy, so everything quickly is revealed and all is made well. The audience is given a final Moritz and Davenport comedic treat as they fashion themselves as high court dandies. They clearly had fun with their roles and that is what makes for an excellent Shakespearean clown.

If you couldn’t already tell, I highly recommend this production. Every element came together to execute this tragicomedy with a professional finesse some may not expect from a local company. Go and buy your ticket for the final weekend and see why we are so blessed to have such a talented company right here in our neighborhood.