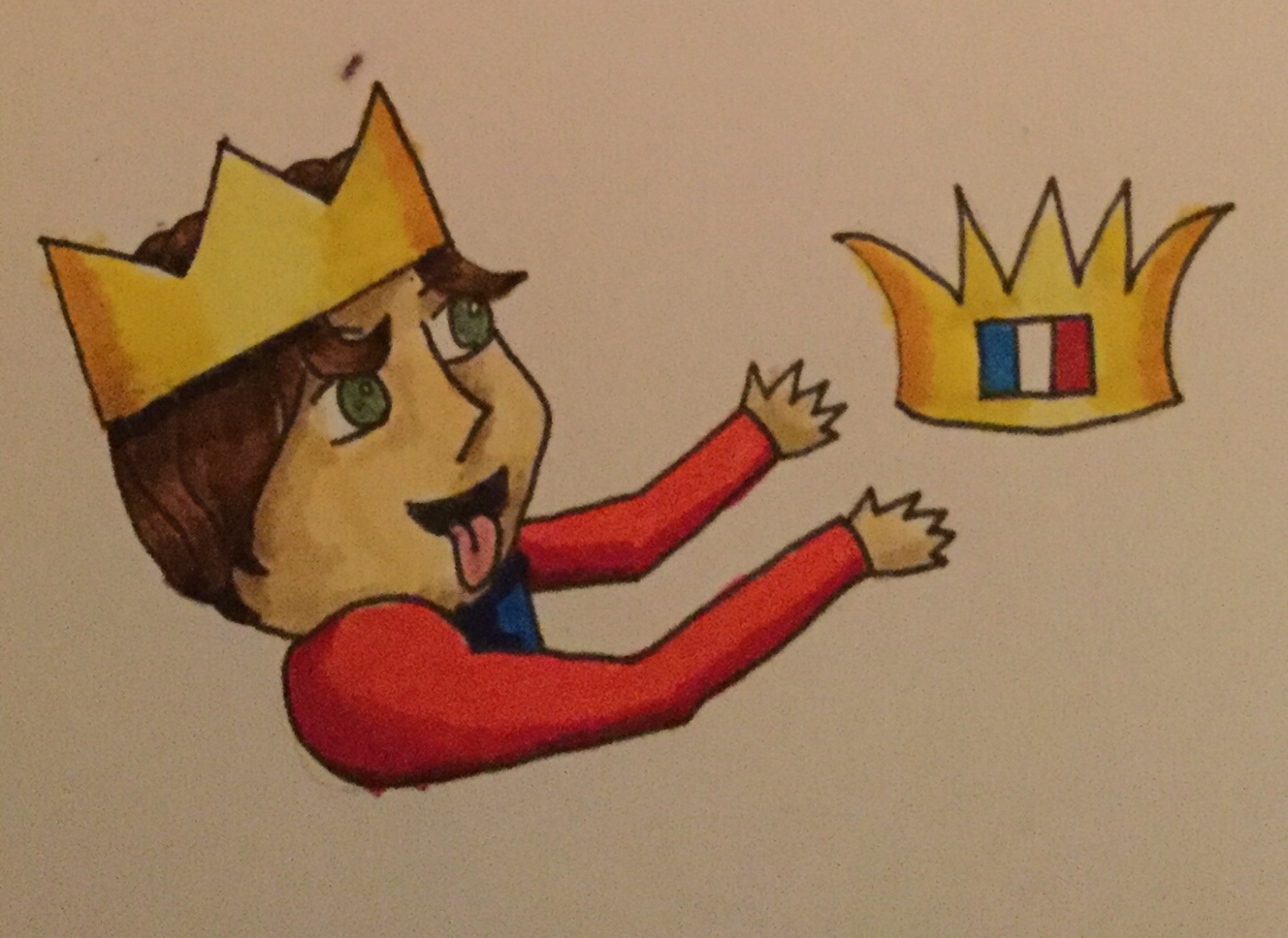 Pistol captures a French soldier. He attempts to demand a ransom, but since he doesn’t actually speak any French and the soldier doesn’t speak English, there is quite a bit of confusion. Pistol calls the boy in to translate and they discover the the French soldier is a gentleman and will pay 200 crowns for his ransom. Pistol is happy with this offer. The boy goes to sit by the English supplies because he finds Pistol to be wholly dishonorable.

The French leaders realize they are losing and decide to go down fighting.

Henry learns that York and Suffolk have died on the field of battle. York was struck down three times but kept fighting. That is, until he saw his cousin, Suffolk, lying dead on the ground. He kissed Suffolk and died beside him. It was such a touching moment that it made these battle-hardened soldiers cry.

The French gathered their troops again, so Henry orders every prisoner to be executed.

Fluellen and Gower solemnly speak about how the French slaughtered the boys and took all of the English loot. Fluellen then explains how Henry is similar to Alexander the Great. You see, they were both born in towns with rivers and murdered their best friend. Well, Henry didn’t murder his best friend, but he cast Falstaff aside.

Henry is super peeved about how the French have conducted themselves in battle and swears to show no mercy. Montjoy approaches in this instance. He asks that they be allowed to bury their dead and – more importantly – separate the nobles from the common rabble. Henry is hesitant because he isn’t sure who won. Montjoy confirms that the English have won. Henry asks Montjoy what castle is nearby and he says Agincourt. Henry proclaims that the battle will be known as the battle of Agincourt. Fluellen and Henry gush about being Welsh.

Henry sees the soldier that he argued with (while in disguise) the other night. He plays dumb and asks the soldier what he is doing with that glove in his helm. The soldier explains that he got in an argument with another soldier and said if they lived he would hit him upside the head. Fluellen confirms that the soldier must live up to his word. After the soldier is dismissed, Henry gives Fluellen the glove that he should be wearing. He makes up some story and sends Fluellen off. He also sends protection for the soldier who is about to hit the wrong guy.

Fluellen comes across the soldier and is promptly struck on the ear. This, obviously, makes Fluellen pretty mad. The two men squabble briefly before the King shows up. Fluellen repeats back the King’s fake story about the glove and the soldier provides his own, accurate, account. The King confirms the soldier’s story and explains that he was the one that accepted the glove challenge. At first, they make it seem like the soldier should pay for his crimes against the King. The soldier begs for his life, as he never would have said those things to the King. Henry gives him some money and they all have a good laugh. Fluellen also gives the soldier some money and tells him to stop getting into dumb fights.

The King takes an account of the dead. There are about 10,000 French who perished on the field of battle. A significant number of them would be considered noble, or at least of “quality blood”. The English, however, suffered very few losses and most of them were peons, so clearly God was fighting on their side. They prepare to head home.

The stage is simply not sufficient to portray such an expansive scene, so we will have to use our imagination. Henry V reaches Calais and then sails home in victory, the people of England coming to greet him. As he approaches Blackheath, the Lords ask him to display his battle-worn sword and helmet in front of him. He refuses because he isn’t vain anymore. Then he heads into London where the Mayor and all the citizens crowd the streets to greet their victorious King. However, the French have invited him back to accept the terms of his victory, so back to France we go.

Fluellen is wearing a leek in his hat, despite the fact that it is not the day a Welshman would typically wear a leek in his hat. However, Pistol had the audacity to mock his leek by suggesting he eat it, so Fluellen has decided to wear the leek until he sees Pistol again. Conveniently, that is when Pistol comes walking by.

Fluellen starts berating and beating Pistol (who remains obstinate) until even Gower tells him to stop. Fluellen won’t stop though. He insists that Pistol eat the leek. After much beating, Pistol eats the leek and appears regretful enough that Fluellen finally leaves him alone.

This is when we find out that Nell, Pistol’s wife, died of the French disease, also known as syphilis. Pistol decides he’s just going to go back to England and become a thief.

They all greet each other with much pomp and love. Burgundy hopes that the peace talks go well since he worked so hard to get them there. You see, poor Peace has been driven out of France and run ragged by all the fighting. It has transformed all of France into a wild land full of roughness and mean looks. He hopes that gentle peace shall return to France.

Henry says they can have the peace, if France gives in to all of his demands. The French King wants to go through the demands together. Henry sends his most trusted advisors to go and negotiate on his behalf. He wants some alone time with Katherine, his top demand.

Henry sheepishly asks if Kate likes him. She doesn’t speak English, so she doesn’t understand exactly what he wants to know. He decides to just shower her with compliments. It seems to work pretty well. Henry isn’t confident in his ability to woo with words. He also can’t do any other romantic things, like dancing. He wishes he could use his soldier skills for wooing, but that is just not how wooing works. He presents his plain speech as a virtue because it means he speaks honestly and will never talk himself out of love. He plainly asks her if she loves him.

Katherine doesn’t know if she can love the enemy of France, but Henry insists he is a friend to France because he wants all of it. He tries to say it in French. It’s not great. They both acknowledge it’s bad. He tries to ask her again to love him. She’s still unsure. He knows she loves him. He knows she will tell her friend all about how awesome he is. He suggests that they will get married and have a boy, who will conquer the world (not quite what happens…see Henry VI Parts 1, 2, and 3). She still doesn’t trust him.

He knows he’s not super attractive, but there’s nowhere to go but up. She will make him look better as he ages. He pledges to give her England, Ireland, France and himself. He asks her again to marry him. She agrees, if it will please her father. He tries to kiss her, but she is embarrassed. He tries for the lips, but it is unfashionable for ladies to kiss before the wedding. Henry argues that they are King and Queen, so rules don’t apply to them. They kiss and Henry finds it quite enjoyable.

The peace talk contingent returns. Burgundy gently teases Henry for not being super great at wooing. Henry asks Burgundy for his help and they quip back and forth with cliches about love being blind, etc.

Then, they get to the real business. The French King has agreed to let Henry marry his daughter and has conceded on all terms but one. He won’t sign Henry’s name on legal documents. Henry agrees to let that one slide. And with the new marriage alliance, peace comes to France and England. The Queen blesses the marriage and they start the marriage preparations.

The author has tried to do justice to the stories of such great men, but it is difficult in such a confined space. After Henry V comes Henry VI, an infant king. He loses France. Just wanted to remind everyone of that before the play ended.