By usurping Richard III in 1485, Henry Tudor (now Henry VII) brought about the end of the Wars of the Roses, decades of turmoil for the English people. The Tudor Dynasty meant a long period of peace and prosperity for England…at least that is what they wanted us to believe. Unfortunately for the Tudors, Henry’s claim to the throne was extremely weak and could have been pretty easily challenged by any number of royal descendants. In order to secure a peaceful reign, the Tudors began a propaganda machine that aimed to convince the English people that rebellion was a bad idea. They accomplished this by besmirching the legacy of previous monarchs, which became known as “The Tudor Myth”. Because of this, they were largely successful in convincing the country and the world that they brought a peace to the country that allowed it to prosper.

Why was The Tudor Myth necessary?

Of all the potential descendants of Edward III, Henry Tudor had perhaps the weakest claim to the throne. 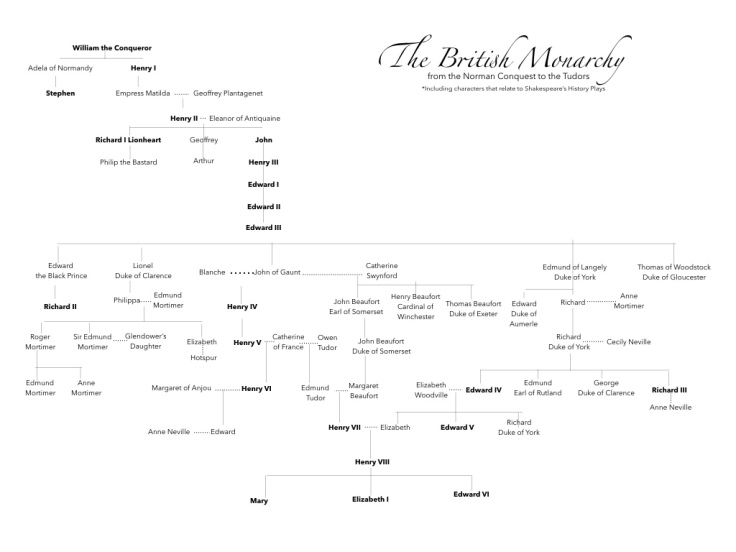 His grandmother was Catherine of France, who was married to Henry V until his death. After Henry V died, she married Owen Tudor. Together they had a son named Edmund Tudor, who married Margaret Beaufort. She was descended from John of Gaunt through his second marriage. Edmund and Margaret were Henry VII’s parents. To summarize, he had no real claim through his father and a weak claim through his mother. Generally, mother’s didn’t help much when establishing a dynastic claim. He attempted to remedy this by marrying Edward IV’s daughter, Elizabeth. It helped, but it still left the Tudors vulnerable to rebellion.

They needed to prevent rebellion and outright war, which would become more difficult as the dynasty continued. Henry VII’s reign, as most will know, was fraught with political and religious turmoil. After his death, the crown quickly shifted from Edward to Mary to Elizabeth. The constant shifting made people nervous, especially the powerful people who were close to the monarch. If rebellion were to occur, it would likely start with the powerful and be backed by the people. It was crucial for the Tudors to establish that rebellion simply wasn’t worth the trouble.

What exactly was the myth?

The Tudors essentially worked to convince the people that most of the previous monarchs were terrible and lead the country into war and chaos and that they, the Tudors, were the only clear solution to England’s problems. The key was to not outright make everything up, but to highlight the worst parts of each monarch. Richard II was extremely vain, terrible with money, and only concerned with his own needs. Henry IV, as a usurper, started decades of chaos in England. This was sort of true, but the majority of his reign was peaceful. Henry V was a more difficult one to take down because he was known for fighting valiantly and winning back huge parts of France, so they went after a young Henry and started rumors that he was a party boy. Henry VI was easy because he was inept and plagued by mental health issues, paving the way for his evil wife to control the throne. He lost all of France. Edward IV was another usurper, so we couldn’t really like him too much. Plus, he blew off his royal alliance marriage to bring the scheming Woodvilles into the mix. Then, there was Richard III, the monstrous hunchback who murdered children. Compared to all these terrible people, who wouldn’t want to just stick with the Tudors?

How did they achieve it?

They started with the chroniclers, those who recorded British history. It is often said that history is written by the victors and this was definitely the case with the Tudors. Those who started writing down the history of the Wars of the Roses, particularly Richard III, were writing under the reign of Henry VII. Most of the people who would be able to give the intimate details of the losing side were likely executed, exiled, or in no position to speak out against the new monarch. So, how the Tudors saw things became fact. It wasn’t until much later that historians had the ability to find the flaws in the original chronicles.

These chronicles were often the sources for the writers at the time, like Shakespeare. This was how the myth spread into popular entertainment. Of course, the Tudors couldn’t take the chance that plays would automatically get the message right, so they had censors. Tough restrictions were placed on actors as to where, when, and how they could perform. They had to be sponsored by a noble family. Then, every play was submitted and reviewed by the Master of Revels before it could be performed for the public. This often meant that potentially sensitive scenes were removed. For example, the scene during which Richard II relinquishes the crown was removed from early productions.

Finally, anyone was was perceived as speaking out against the crown was harshly punished. Those speaking publicly against a monarch were either disfigured or executed. Those plotting rebellion were swiftly found guilty of treason and executed. Playwrights and actors who portrayed scenes that were seen as subversive were often imprisoned. This pretty strongly discouraged descent and opened the doors for the easy spread of the Tudor Myth.

Art does not occur in a vacuum, so it is crucial for us, as the reader, to consider the source and full context when making our analysis.