Everyone wakes up, the lovers all get married and a play is performed.

Titania and her fairies are doting on Bottom, who is taking full advantage of the situation. He asks to be scratched and then for the honey bag off of a bee (because that’s not crazy hard) and then more scratches. Titania asks if he wants anything to eat. He makes a mixture of human and donkey requests. Titania promises to send her fairies to find him the food he asks for. He would rather sleep and promptly does so. She dismisses her fairies and cuddles up next to her love. 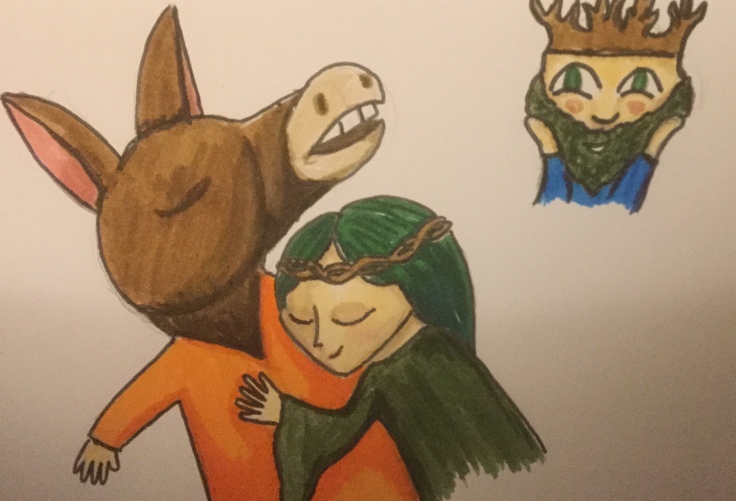 Oberon and Puck enter, laughing at the scene before them. Oberon explains that his plan worked and he was able to get Titania to give him the changeling child. They wake Titania, explain that it wasn’t a dream, and then return Bottom to his proper form. Titania isn’t mad, but finds it amusing, so her and Oberon go off together.

Theseus and Hippolyta enter the woods on a hunt with Egeus. As they discuss Hippolyta’s past exploits with famous Greeks, they stumble upon the sleeping couples. They promptly wake them with horns. Lysander explains that he and Hermia were running away from Athens to be together. Egeus is not happy at that development and demands punishment. Theseus isn’t that inclined to get involved, so Egeus urges Demetrius to fight for his wife. Strangely, Demetrius’ love for Hermia has melted away and he only has eyes for Helena. Egeus is still cranky, but Theseus decides it would be much more fun for them all to just get married together. They abandon the hunt and return to Athens. The friends all laugh about their crazy dreams and head off to get married.

Bottom wakes up ready to continue play practice. Slowly, his “dream” returns to him and he decides to have Peter Quince write it as a ballad. He gives it the creative title of “Bottom’s Dream.”

Quince and the rest of the players wonder what has happened to Bottom because he is the only one that can do justice to the part of Pyramus.

Snug enters to explain that the Duke was married early, along with two other couples. They all are dismayed at the lost income for not being able to perform.

That is when Bottom busts onto the scene and gives them all relief. He wants to tell them all about his crazy dream, but there’s no time. They have to go perform before the Duke. He urges them all to put their best foot forward and it is sure to be a great play.

Theseus and Hippolyta wonder about the lovers and the strange things they have seen. Theseus writes it off as love making one mad. A madman sees devils and fearful things, but a lover sees beauty and fanciful things. They are one in the same.

The lovers enter and Theseus calls forth his Master of Revels, Philostrate. Philostrate presents the Duke with a list of items they could be entertained by this evening. The first is a song, but the Duke doesn’t want to hear it. The next scene he has already seen, so he doesn’t want that performed. The satire doesn’t seem fitting to a wedding celebration. The last option is Pyramus and Thisbe. Theseus wants to see that because of the very contradictory description. Philostrate says it’s pretty terrible and the Duke probably doesn’t want to see it. Theseus insists and Philostrate goes to fetch the players.

Hippolyta isn’t so sure about this decision, but Theseus ensures her that it will be hilarious. They can all make fun of the players. He does it all the time when people get flustered talking to him.

The play is a doozy. First, the prologue sums up the play. The actors playing the wall, moonlight, and lion all explain what they are playing. The lovers all comment on the goings on as the play is performed. Theseus stops them from doing an epilogue and everyone goes to bed.

Puck returns to prepare the space for the fairy King and Queen. Oberon and Titania call forth their fairies and celebrate in song. Puck delivers the final soliloquy to the audience, asking forgiveness for any offense and tells the audience to pretend this was all but a dream.