Theseus, the Duke of Athens, prepares for his wedding to Hippolyta. He is thrilled to have won such a woman and commands the entire kingdom to celebrate.

This is when Egeus drags in his daughter, Hermia. She has it in her head that she can marry the man she loves, Lysander, and not the man her father chose for her, Demetrius. Hermia argues that Lysander is just as good of man as Demetrius, plus she loves him.

Egeus demands that Theseus impose the law on his daughter, Demetrius or death. Theseus isn’t quite that harsh and offers her a third option: become a nun. None of these sound particularly appealing to Hermia, so Theseus gives her a fortnight to think about it.

Demetrius tells Lysander to give up, but he won’t. Lysander teases Demetrius for having Egeus’ love and suggests her marry him. Egeus doesn’t find this amusing and demands that his daughter marry Demetrius. Lysander pleads that he is just as good as Demetrius. Also, Demetrius was into Helena until about a minute ago. Theseus confirmed he heard about Demetrius and Helena, too. Then, he calls Egeus and Demetrius away in an effort to end the argument.

Once they’re alone, Lysander comforts Hermia by explaining that all lovers go through difficult times. He then lists how much worse it could be. Then he lays out a plan for the lovers, he has an old aunt with no children who will help them both get married outside of Athens. They will run away tomorrow night.

Helena comes up, looking sad. Hermia tries to comfort her, but she’s not having it. She wonders why she can’t be as pretty as Hermia, so that Demetrius will love her. She asks Hermia to reveal her secrets. Hermia explains that she does nothing but frown at Demetrius, but still he loves her. Helena explains that the more she loves Demetrius, the more he hates her.

Hermia, in a final attempt to comfort her friend, explains that she will be leaving Athens forever. They explain their plan to Helena. After Hermia and Lysander leave, Helena decides to reveal their plan to Demetrius is some convoluted attempt to win back his love.

A troupe of actors prepare to perform before the Duke for his wedding. They will perform the story of Pyramus and Thisbe. Peter Quince, the troupe leader, reads out the parts. Bottom, will play the male lead, Pyramus. Young Flute will play the lady, Thisbe. He is not thrilled about this prospect, so Bottom offers to play both parts. Quince refuses.

He casts more of the parts. Finally, he gets to the lion. Bottom offers to play this role as well. The answer is still no. Quince worries that Bottom will scare the women too much. The players keep offering helpful tips until Quince tells them to just learn the roles that they were assigned.

Puck and another fairy meet in the woods. Puck asks what the other fairy is doing. The fairy explains that they are responsible for spreading dew drops on the flowers for the Fairy Queen, Titania. Puck tells him that Oberon isn’t too happy with Titania because she stole a beautiful Indian changeling boy for her court and Oberon wants the boy in his. The other fairy now recognizes Puck as the mischievous fairy that causes all sorts of shenanigans in the human world. He happily confirms the fairy’s suspicions and tells about all of the funny pranks he plays on humans to make Oberon laugh.

Oberon and Titania share a cold greeting. Oberon tries to guilt trip her a little bit, but she is having non of it because she knows he has been disguised as a human wooing some pretty lady all day. Probably because he is upset about Hippolyta. He tells her not to even bring up Hippolyta because he knows she loves Theseus. Titania asks how long they are going to keep this feud up because it is just wreaking havoc with the weather in the mortal world.

He just wants the changeling boy, but the boys mother was a votress of Titania’s. Titania has sworn to bring up the boy in his mother’s honor and she will continue doing just that. Oberon wants her to come out of the woods. She says she will stay there until Theseus’ wedding night when, if Oberon will dance with her, she will return home. He still just wants the boy and she leaves in a huff.

Oberon asks Puck to fetch him a flower he saw once while he was listening to a mermaid sing. Cupid struck the flower with his arrow, and so now that flower makes a person fall asleep and fall in love with the first living thing he or she sees. Oberon wants to make Titania fall in love with some crazy animal so she will give him the boy if he promises to take the charm away.

Demetrius and Helena walk through the woods. Demetrius is insisting that he does not love Helena. Helena super loves Demetrius though and vows to follow him everywhere. He doesn’t understand why because he is nothing but mean to her, but still she loves him. He says he’ll run away and she insists on chasing him. He does just that and she runs after.

Oberon wishes her well. When Puck returns with the flower, Oberon explains his plan, but also asks Puck to use it on Demetrius. He wants Demetrius to love Helena. The only descriptor he gives to Puck is that the man was in Athenian clothing, so nothing can go wrong there. Why would there be any other Athenians in the woods?

Titania gets ready to sleep in the woods and has her fairies sing her to sleep. Oberon pops in after the fairies leave and puts the flower juice in Titania’s eyes, reminding us one more time of his plan.

Lysander and Hermia pass through the area. Lysander admits that he might be lost. Hermia is too tired to care so she just wants to sleep on the forest floor. Lysander tries to cuddle up next to Hermia, but she is not that type of girl and asks him to sleep further away. He does so reluctantly.

Puck comes in quite distraught because he can’t find any Athenians in the woods. Fortunately, he just found some sleeping there, so he puts the flower juice on Lysander’s eyes.

Demetrius comes in and Helena chases him. He’s a faster runner though and she’s winded. She wonders aloud why she can’t be as pretty as Hermia. She stumbles upon Lysander and wakes him up because she’s worried he might be dead. He wakes up and sees Helena, thus he falls in love with her.

He starts confessing his love for Helena, but she doesn’t believe him. She thinks he’s making fun of her, so she runs off. He looks back briefly at Hermia and then chases after Helena. Hermia wakes up scared and alone in the woods.

The troupe of actors decide that this clearing (where Titania is sleeping) seems like a great spot to start rehearsal. Bottom and the other actors are concerned that the ladies in the audience will be afraid of Pyramus killing himself with the sword and the lion. They decide to not have Pyramus kill himself and write two prologues that explain Pyramus and the lion, so the ladies aren’t afraid.

Puck decides to have a little fun and while Bottom is offstage, he transforms his head into a donkey head. All the actors are terrified and run away screaming. Bottom questions what has them so scared. They run back in briefly to tell him he has a donkey head before running away again. Bottom decides to sing himself a song.

Titania wakes up, sees Bottom, and immediately falls in love. She tells him she loves him, but he doubts that because he’s so ugly. She tells him he’s beautiful and calls forth her fairies to take care of him.

Oberon wonders how his plan is working. Puck comes over and explains how he gave Bottom a donkey head and Titania fell in love with him. Oberon thinks this is HILARIOUS. He asks how his plans with the Athenians went and Puck says he did what he was told.

Hermia and Demetrius walk on the scene. This is when Oberon finds out that Puck put the flower juice into the wrong dude’s eyes. Hermia is mad because she thinks Demetrius killed Lysander. He tells her he didn’t, but she’s still not real happy at the moment. Demetrius realizes he can’t make her happy, so he might as well just go to sleep.

Oberon scolds Puck for screwing up the Athenian plan. He had ONE job. He puts some of the flower juice in Demetrius’ eye. Puck brings back Helena, with Lysander in tow. Lysander is still trying to explain that he is not wooing her out of scorn. Demetrius wakes up and also falls in love with Helena (although wouldn’t it have been great if he had seen Lysander first). When he starts confessing his love, Helena becomes even more irate because now everyone is making fun of her. They both swear they’re not and try to get the other to deny their love. 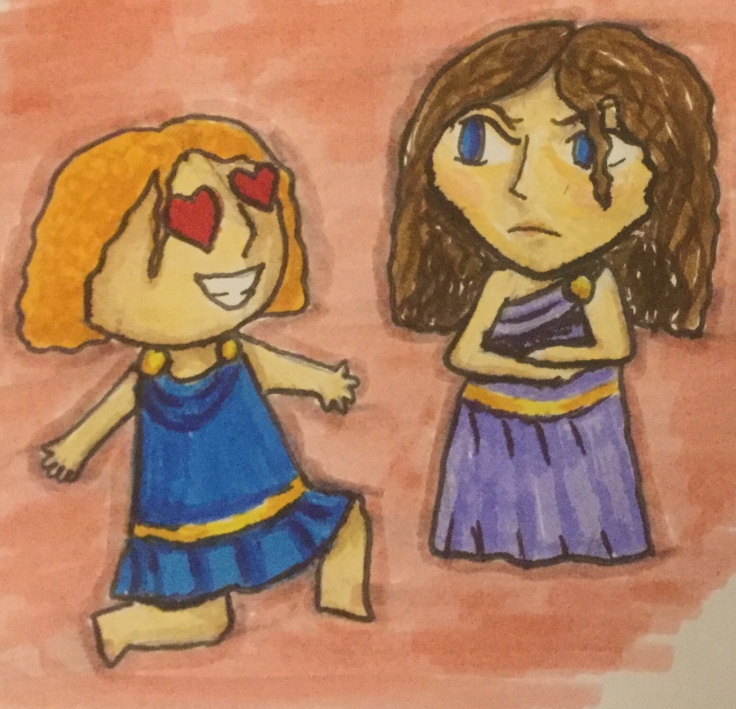 Hermia enters the scene and is very relieved to find Lysander. Lysander brushes her off for Helena. Helena starts yelling at Hermia for being in on this mean trick. Hermia doesn’t understand. She thinks everyone is trying to trick her. Lysander and Demetrius keep escalating their love competition until the idea comes out that they should kill Hermia. They decide that’s a little extreme, but Hermia is still obviously hurt.

Hermia and Helena start yelling at each other. Hermia is mad that Helena stole her love and Helena still thinks this is all some sort of cruel joke. Their argument escalates until the men intervene to defend Helena. Lysander and Demetrius leave, asking Helena to follow them. Helena storms off in a different direction and then Hermia goes on her own way.

Oberon tells Puck he really screwed this one up and tells him how to fix it. He tells Puck to taunt the men into running around until they tire themselves out. He gives Puck an herb that will makes this all seem like a dream and return Lysander to his right mind. Puck does just that and conveniently the ladies lay down to sleep right there too.